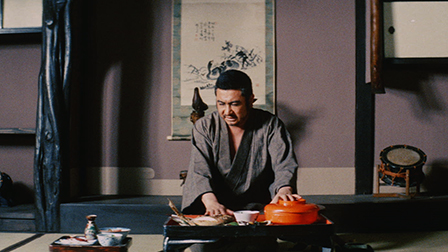 This was a really good movie to end the series. Zatoichi heads home and completes the circle on the movie series.

Zatoichi meets a friend from hi childhood, Shinbei, who he used to raid watermelon patches with. Shinbei doesn't recognize Zatoichi and when Zatoichi gives him a massage, and tells him who he is, the rich rice merchant brushes him off,

Shinbei is also just returning to the old village. He ingratiates himself to the locals by paying off their debts, which they owed because of a series of bad harvests.

We then find out that Shinbei is not the shining knight he seems. He wants to take over the local rock quarry that the locals turn to in bad times. Shinbei wants to get the locals in his debt so he can get them to work for him.

Ichi meets Omiyo, who was raised by the same woman as him, He also reunites with her grandfather Sakubei (Takashi Shimura).

Shinbei sets his sites on the virtuous Omiyo, and his men injure Sakubei when they come for her.

The local magistrate has also been cheating the locals with the rice text they have to pay.

Zatoichi ties up all the loose ends. He takes care of the cheating magistrate, and then goes after Shinbei. He slices his way through all his men, and then takes out his childhood friend who pleads for his life.

A nice way to wrap up the series. Very well done.
Posted by Jack at 4:15 PM No comments: