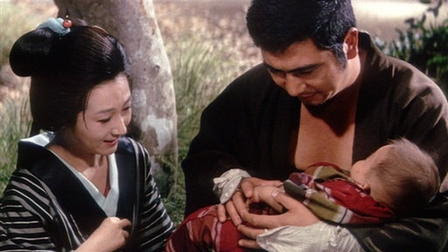 
The movie begins with some samurai searching for Ichi. They search a group of blind masseur who all have the name Ichi. When the samurai leave, Zatoichi comes out of the shadows.

Zatoichi befriends a young ill mother who has a child with her. He gives her his place in a palanquin, a group of hired assassins attack, thinking Zatoichi is still in there. They kill the mother, and Zatoichi vows to bring the baby to his father.

Zatoichi then sets off to find the father and the assassins follow. When they attack Zatoichi kills one, and they others vow they will get him. The assassins convince some other gangsters to help, telling them that letting Zatoichi walk around is hurting all their reputations. They attack Ichi while he is changing the baby's diaper, and he chops them all down.

Zatoichi then goes to a gambling house with the baby. He wins and then they try to switch dice on him, but Zatoichi pulls out his blade and makes them play fair. Zatoichi leaves with his winnings but the gangsters follow to try to take their money back, and Zatoichi chops them down.


Zatoichi then runs in to a female pickpocket, Miss Ko, who is about to be killed by a samurai. He saves her, and then enlists her aid in the journey.

Zatoichi finally gets to the house of the father, Unosuke.  Ichi explains what happened. Unosuke denies knowing the women or the child. He is a gangster and he says he is about to marry another boss's daughter. He throws Ichi out.

A monk tells Ichi that if he loves the boy he will leave him with him. Ichi gives the boy to the monk and tells him to raise him to be a good man.

Unosuke and some gangster friends then confront Ichi. They surround him with torches, hoping to confuse his sense of hearing with the sound of the burning flames. Xatoichi catches on fire and roles on the ground but still manages to kill most of his attackers.

Zatoichi tells Unosuke to admit that the child is his and Unosuke throws down his weapon and acknowledges his wife and his child. Unosule tells Ichi he will take the boy. Unosuke then attacks Ichi and Ichi strikes him down.

Zatoichi then heads down the road singing a song.