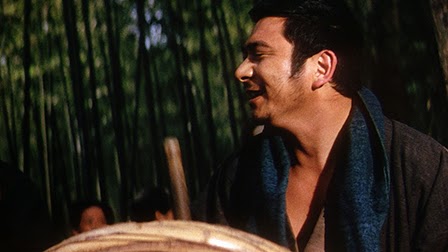 
Ichi travels to the village of Itakura to visit the grave of Kichizo, a man he killed two years before. Zatoichi wanders in to a celebration. The eighteen surrounding villages have finally scraped together the one thousand ryo that they owed the tax man. Zatoichi does a little dancing and even plays the drums.

Three samurai, one who uses a whip, attack the caravan bringing the taxes to the governor and steal it. Zatoichi was seen siting on the chest, that had fallen off a horse, and is blamed for taking part in the robbery.  A local boss, Chuji, is also blamed for the theft, even though has has always been supportive of the farmers.

Zatoichi then sets out to clear his name. The villagers are given ten days to get their taxes in. Zatoichi first goes to see Boss Chuji to see if he was involved with the theft. Zatoichi and Chuji then find out that two of Chuji's men had been involved in the theft and Chuji sends them away from his band. Zatoichi then leaves carrying with him a little boy on his back who he is going to bring home.

Some men from the village then attack Chuji, an Zatoichi fights them even with the boy on his back.  Chuji and his men think they escaped but are then surrounded. Most are killed but Chuji escapes.

Boss Monji is the one who stole the gold. he has it set up so his rival, Chuji gets the blame. Zatoichi goes to his place and starts to gamble and win. The samurai who carries a whip, Jushiro, goes in to the gambling hall and chops a coin in half. He bets Zatoichi 35 ryo that he can't do it. Of course Zatoichi does it.

Zatoichi hears two of the thieves talking about how they brought the chest to Monji, He questions them and when they attack he chops them down. Zatoichi then goes to Boss Monji's place. Zatoichi then meets Monji and Jushiro. Jushiro tells him he must leave and Zatoichi does leave, for now.

Monji then orders the execution of four farmers who petitioned him for more time to find the tax money. The farmers are ready to revolt and when they see Zatoichi they ask him if he has found the money. Zatoichi tells them he will find the gold and clear his name.

The men are being brought to execution under heavy guard with eight musket men.  Zatoichi quickly brings down all eight and frees the prisoners. The farmers rejoice.

Monji attempts to escape with the chest but Zatoichi is there. When he attacks Ichi chops him down and takes the chest.

Jushiro tells Ichi that he will be waiting for him at a temple. As in many of the Zatochi movies we have an enemy who has noble qualities and respects Ichi for the fighter that he is (reminiscent of the Ranown Cycle movies).

Ichi goes off to face Jushiro. Jushiro rides up on a horse and puts his whip around Ichi's neck and drags him. Ichi loses his sword and Jushiro begins whipping him. But ichi finds his sword and the duel is on, and of course Ichi comes out on top.