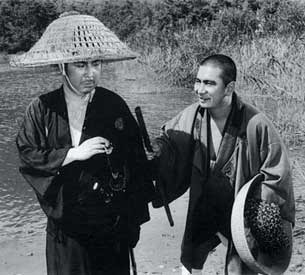 The first movie in the series that generated twenty five sequels, and a TV show. The movie stars Shintaro Katsu as Zatoichi (Ichi) a blind masseur, gambler and master swordsman.

Zatoichi may be blind, but he is not a person who can be taken advantage of as he proves to a group of ruffians at a gambling table in the first scene in this movie. Ichi then visits with a friend, Shigezo, who is one of the bosses in the village. Ichi is looking for work and his friend tells him he will look for him.

There are two gangs in town and Sasagawa's brings in an expert swordsman named Hirate. Zatoichi meets him while they were fishing and he can sense that the samurai from Edo is sick. Hirate has told the boss who hired him that he won't use his sword to kill people. Meanwhile Shigezo tells his men that if war breaks out they will be able to count on Zatoichi. When Zatoichi hears this he tells him that his life doesn't come cheap. Zatoichi negotiates a fee of eight ryo to fight for Shigezo. We now know Zatoichi and Shigezo are not friends, but are using each other.

When two men try to ambush Zatoichi he makes quick work of them. Sasagawa and Harate witness the quick fight, and Sasagawa tells Hirate that he will take care of Zatoichi with his secret weapon : a rifle. When Harate passes out due to his illness, Sasagawa begins to panic. When Shigezo finds out he issues a challenge to Sasagawa. Shigezo also tells Zatoichi that he does not need him any more and is not going to pay him what he owes him. Zatoichi refuses to return the original retainer and Shigezo calls him a thieving, blind bastard.

When Harate hears that Sasagawa is bringing the rifle to shoot Zatoichi he decides to join the battle, but the rifle must be left behind. When Zatoichi hears that Harate is going, he decides he must go to. Harate begins chopping down Shigezo's men, and then Zatoichi shows up. The men on both sides gather round, and Zatoichi tells Harate that this is foolish, but Harate wants to duel before he dies.

The duel only lasts a minute and Zatichi comes out on top. Harate says: "Magificent. Rather than getting killed by scoundrels I wanted to die at your hands."

Shigezo congratulats Zatoichi, but Zatoichi castigates him for celebrating while his men have died needlessly.
Posted by Jack at 2:02 PM