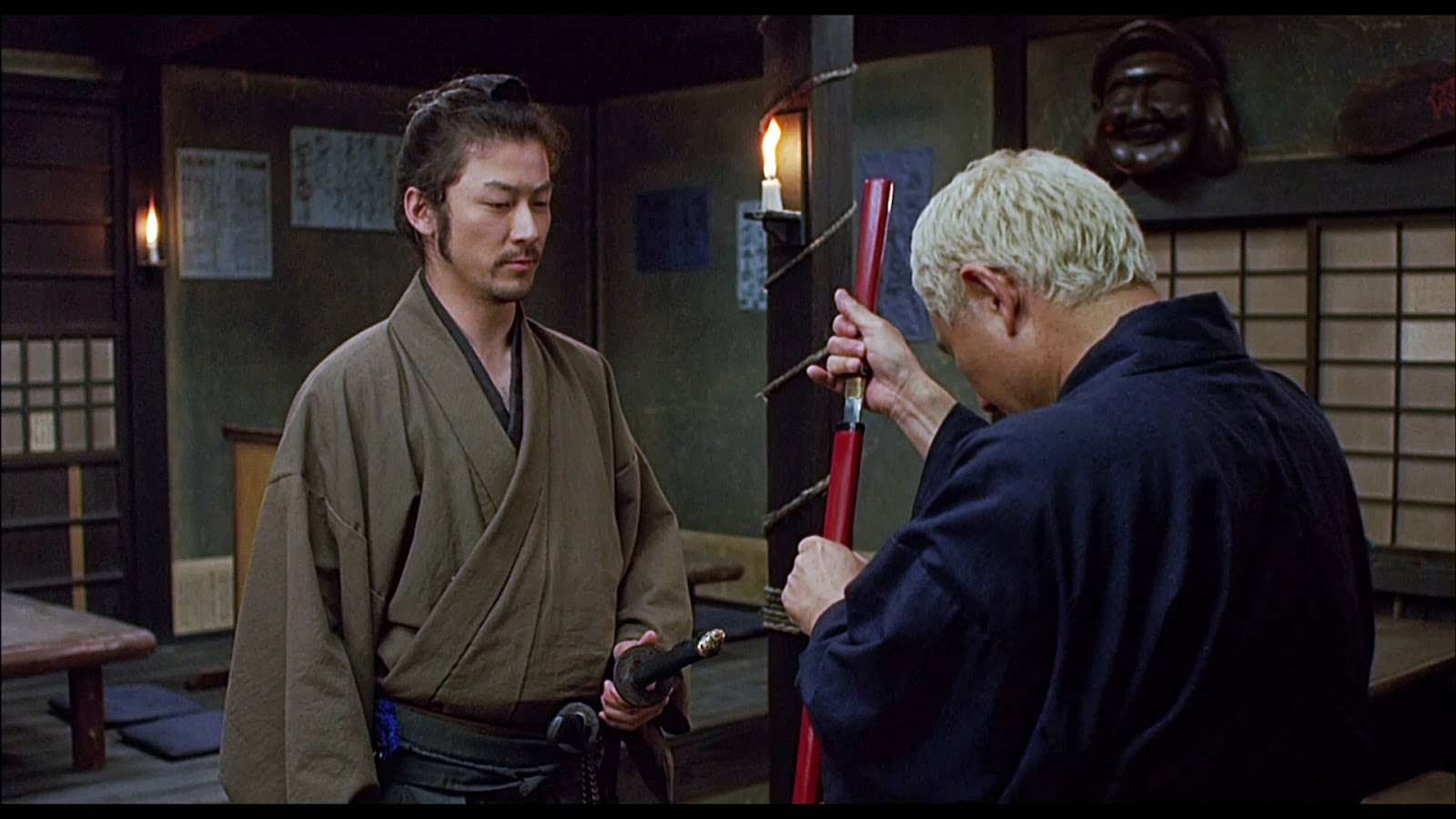 Twenty six other films had been made about this character starring actor Shintaro Katsu. This version is directed by and stars Takeshi Kitano.
We first see Zatoichi, the blind masseur and swordsman, sitting in the countryside. A group of gangsters, who know of him, steal his cane. But Zatoichi takes one of their swords and quickly chops them down. After killing three, the others run away. We then see a flashback of a brother and sister (both dressed as geisha), who slaughter a traveler, in revenge for something he did to their family.
We then see some local gangsters shaking down business owners. Meanwhile Zatoichi carries home a woman's vegetables for her. She invites him to stay with her. She tells him how the gangsters are running the town. Now the people have to pay protection money daily. We then meet a skilled ronin, Hattori, with a sick wife, who demonstrates to some gangsters his skills, and tells them to tell their boss that he is looking for a job as a bodyguard. When the boss comes, he is impressed and hires Hattori.
Zatoichi then goes off to gamble. We then see Hattori slaughter some men for his new boss, Mr. Ogi. You can tell he is not happy having to kill for money, but he needs the money to help get his wife well.
We then see a scene from the past where some samurai having a kendo contest in front of some lords. One, Isaburo, was very powerful, and also cruel. He easily defeated all the local samurai and then defeats Hattori and beats him badly. Back to the present, Hattori has now found Isaburo, and wants to duel him, but Isaburo is too sick.
The siblings we met earlier, dressed as geisha, then meet up with Zatoichi and a gambler he was lucky for. Zatoichi know that they are after his money and he knows that one of them, Osei, is a man, and he tells them so. The girl, Okinu, tells Zatoichi and the gambler their story. Their father was a wealthy merchant, and one night a gang broke in and slaughtered their parents and servants, as they hid and emptied their strong boxes. The sibling tracked down one and killed him and were hunting for the other.
Zatoichi goes gambling, and when they try to cheat him, he chops them down. Hattori is sent to settle the disturbance but Zatoichi has already gone. We then see a flashback of how Osei and Okinu grow up on their own, robbing men, and looking for the killers of their parents.
The two gangs in town face off, with Hattori fighting for one of them. He makes quick work of them. Then he squares off against their main man and quickly disposes of him too.
The siblings go to the gangster boss, to perform and get their revenge, but they are found out and surrounded. Zatoichi comes to their rescue. He quickly slices his way through all the retainers. Hattori is sent for and the final showdown is set up. It's the battle of the quick draw and Zatoichi is too fast, and chops Hattori down.
There is one more score to settle. Zatoichi heads over to the tavern and quickly disposes of the five ninja who attack him. He then confronts the tavern keeper who is really one of the big bosses. He knew him by his smell. He quickly chops him down and then Zatoich heads over to the one boss left, the tavern keepers helper. But Zatoichi doesn't kill him. He says death is too good for him. He slices his eyes and blinds him.
In a scene reminiscent of a Bollywood movie, dancing breaks out and the surviving cast members join in, except for Zatoichi who heads down the road.
Really good production values in a really good movie.
Posted by Jack at 1:51 PM