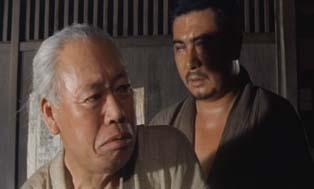 The movie opens with Zatoichi being accosted by two trouble makers who put dirt on his food. He quickly disposes of the two of them. So much for a gentler, peaceable Zatoichi.

A ruthless band of fugitives force their way in to the local law official's home and demand his protection. The official agrees bu says he will want something from them later.

Zatoichi settles in at the home of the kind Dr. Junan (Takashi Shimura). Dr. Junan does not like yakuzas and tells Zatoichi so.

The tales continue the trend of having Zatoichi's reputation grow. People begin to recognize him and fear him. Zatoichi tells the local boss' men that they should tell him that Zatoichi has called on him. Zatoichi is also becoming aware of his growing reputation.

We also see the recurring plot element of having one of the bad guys, who is also the most powerful, show a respect for the man he knows he must fight. In this movie the leader of the band acknowledges Zatoichi's reputation and skills.

We also see the more altruistic Zatoichi continue his development. He has the local official free a girl he has in bondage at his work house, because the father was concerned for her health. Using his reputation and a flash of his sword demonstrating his skill, Zatoichi bullies the official and his men in to giving the girl her freedom.

One of the things that makes Zatoichi so interesting is the dichotomy in his nature. He won't allow himself to be harassed or degraded, and will meet such attempts with ruthlessness and brutality, but he also shows a very tender side for the oppressed.

Zatoichi is ambushed by the fugitives and goes down when a flying blade strikes him, but he is quickly on his feet. He has intercepted the blade with his cane. For some reason he doesn't strike his attackers down.

The leader of the fugitives then does to the doctor's house. He is the doctor's son, but his father won't acknowledge him because of the things he has done.

The corrupt local official asks the fugitives to kill a local head man who defied him. They agree and go to the head man's house and slaughter everyone they come across.

The leader of the fugitives is very dignified in stature, but he is ruthless and his men are psychotic killers,

One of the fugitives shoot Zatoichi with a pistol but he still disposes quickly of the shooter. Zatoichi then falls into the water.He is injured but he escapes. He then uses his sword to dig the bullet out of his shoulder. The doctor then helps to treat him.

The fugitives beat the doctor to find out where Zatoichi is. Zatoichi returns and cops down six of the fugitives. he then goes to rescue the doctor's daughter. Six more fugitives chopped down.  Then another dozen or so and then the show down with the leader. The wounded Zatoichi is still too much for the doctor's son and he quickly chops him down.

Zatoichi wanders down the road.

Another good movie in the series. While some of the early entries in the series felt like they could be TV episodes, these later movies have much higher production values. This movie had the great Takashi Shimura (Ikiru, Seven Samurai, Kagemusha, Rashomon, Throne of Blood) playing the doctor.