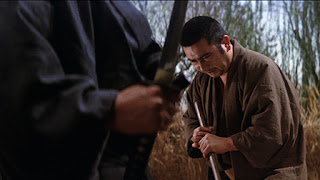 This movie was directed by Kenji Misumi, who did the first movie in this series, The Tale of Zatoichi and also did the Lone Wolf and Cub movies. He also did four other movies in this Zatoichi series.

Zatoichi is hired by a yakuza boss to kill a debtor. He does kill him, but then the boss wants the man's sister too, even though she paid what her brother owed. It was she they wanted all along for a local corrupt official.

Zatoichi regrets what he has done and decides to protect Osode. When the yakuza's men come for her, he again chases them off.

The yakuza tries to hire a wandering ronin who looks good with the sword to kill Zatoichi but he wants too much money.

Zatoichi, bets hi cane, and is then caught cheating at dice and the yakuza tells his men to throw him in the river, tied up, rolled in reeds. The yakuza looking for Osode intercept him, and the wandering ronin gives him his cane back, and the yakuza run away.

The yakuza's men finally catch up with Osode, and she has to go to a brothel and Ichi goes after her. Zatoichi frees Osode, and then kills the yakuza bosses and most of their men.

One last showdown with the ronin. A good duel but Zatoichi wins again.

Zatoichi walks away, leaving behind Osode.