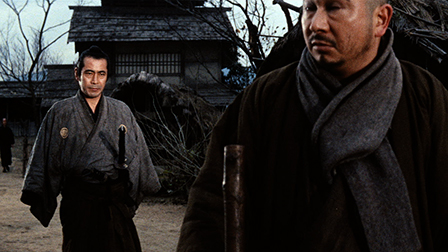 
Toshiro Mifune plays a character similar to Sanjuro, who was the ronin he played in Akira Kurosawa's Yojimbo (1961). His name is different here (Daisaku Sasa),  and his character and background are somewhat different from that character. Yojimbo means bodyguard.

The movie was directed by Shintarô Katsu (Kill!, Samaurai Assasin, Sword of Doom)

The movie begins with Zatoichi killing a pursuer, and then saying I have blood on my hands again. he is tired of the killing. He decides to head to his home village.

Since his last visit, it has fallen prey to Boss Masagoro, the son of a merchant rumored to have stolen gold from the shogunate. The boss has hired Yojimbo as his bodyguard, but Yojimbo is really working for the shogunate, trying to find the gold.

Yojimbo is excited to hear Zatoichi is in town because Zatoichi has a 100 ryo bounty on his head.But when he finds out he is a blind masseur he doesn't want to be bothered. He does go out though, and calls Zatoichi out. He goes in for the kill but Zatoichi slips his sword cover back on. Yojimbo decides he likes Zatoichi.

It's great to see these two characters together on the screen.

Boss Masagoro is after the gold that his father is rumored to have taken too, but his father says he doesn't have it.

Yojimbo is in love with Umeno, and Umeno wants him to kill Masagoro, who is forcing her to be his mistress. But Yojimbo must find the gold first.

Yojimbo taunts Zatoichi, and both finish off men who attack them. Zatoichi is supporting the merchant, and Yojimbo the son.

In the required gambling scene, Zatoichi takes a lot of money from Boss Masagoro.

The merchant's other son in Edo is sending Kuzuryu, a powerful ronin to protect his father (and his gold?). Kuzuryo arrives and is looking for Yojimbo.

Katoichi fixes it so that Umeno gets the money she needs to buy herself out of servitude. He tells Umeno that she can go off with Yojimbo.

Yojimbo prepares for a showdown with Kuzuryo, who carries a pistol. Zatoichi finds the gold. Fighting breaks out all over the place.

Kururyo tries to shoot Yojimbo but Umeno gets in the way.

Zatoichi then knocks off twenty guys or so, and then Yojimbo and Zatoichi square off. When a man shouts that Umeno is still alive they forget the duel and rush back to her.

It was wonderful to see the two great characters on the screen at the same time, but the movie din't know whether to be a comedy or a drama, and leaned too much towards the comedic. There was no sense of tension in the movie : it was all comedic relief.

Could have been much better.